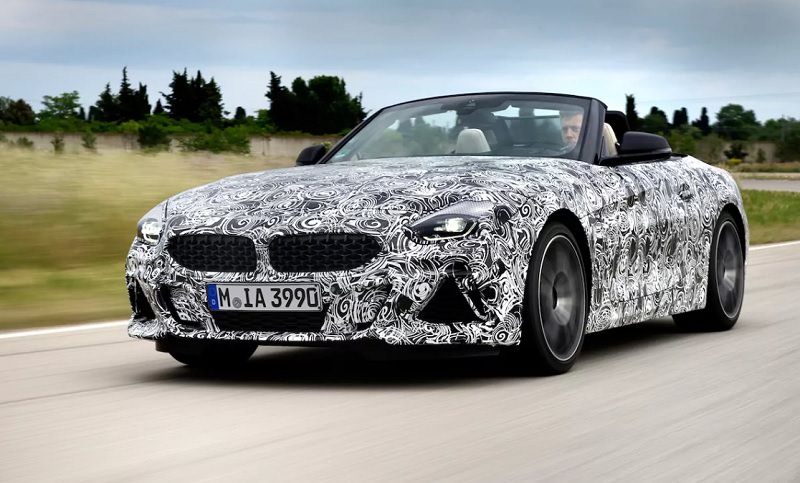 Ahead of it’s debut later this year, BMW has give various automotive publications a chance to drive a 2019 Z4 M40i pre-production prototype around their Miramas test center in the south of France. Perhaps indirectly showing the world just how confident they are with the new Z4, BMW had the prototype driving journalists a M2 lead vehicle with an instructor behind the wheel.

Two engines will be offered at launch, a 3.0-liter turbocharged inline-six M40i and a four-cylinder 30i. For those wondering, yes, the former engine is the same powerplant you’d find in a M240i, said to make around 355 hp and 369 lb-ft of torque in the Z4. The range-topping engine will most likely be paired with an eight-speed torque converter automatic transmission, sending power to the rear wheels only.

What was surprising as this press day was the appearance of two production-ready Z4s sans camouflage. Of course photography of said vehicles are forbidden, so the public will just have to wait for the official reveal.

Though Conner Golden from Automobile Magazine couldn’t reveal the Z4’s design, he could provide an in depth review of just how well the vehicle handled on the track. Claiming the car felt “extremely confident and very responsive” in spite of its hefty 3,400-pound body, the Z4 very agile.

BMW aimed to make the best sports car in its class and the German automaker may have succeeded.
BMW Z5 News is offline
Quote
post #2 of 3 (permalink) Old 06-08-2018, 01:59 PM
Motoren
Senior Member


Join Date: Mar 2016
Posts: 116
He pretty much describes the new Z4 perfectly as a car that's capable for the odd trackday while providing a sporty drive for the usual commute.
Motoren is offline
Quote
post #3 of 3 (permalink) Old 09-07-2018, 05:29 PM
beemer
Senior Member